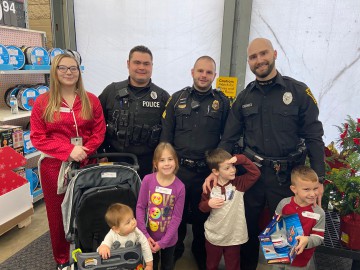 In a rural township, tucked away from the big city of Pittsburgh in Southwestern Pennsylvania, a small police department made up of mostly part time officers patrols the roads and hills. Taking every call day or night. From horrible accidents to domestic squabbles, they are there for their communities, ready to protect and serve.

At this particular Police Department, Borough of Penn PD, only one of those officers is seen as full time because of the hours he accumulates. His name is Sgt. Eric Colamarino. And he has suffered a career threatening accident while on duty.

The Officer in Charge at the time of the accident, Ofc. Aaron Wentroble, states that Sgt. Colamarino is a very special Law Enforcement Officer.

“Sgt. Colamarino is about as big of a go-getter as you can get in a LEO. He’s our only full-time officer by hours, while still receiving part time benefits. Regardless, he’s been the driving force behind our department by putting in the most hours on duty, handling clerical functions, maintaining neighboring jurisdictions we’re contracted to provide policing services for, and all while being the only LEO on duty for three boroughs at any one time.”

While taking on all those duties, Sgt Colamarino still found the time to assist others in their career paths. Ofc Wentroble goes on to say, “He [Eric] was gracious enough to help in me getting my state certification back to active after taking a leave of absence from police work.”

Sgt. Eric Colamarino is an exemplary police officer and a pillar of the Boroughs under his watch and care.

However, we know the most dedicated officers run into harm’s way more often than others. And sometimes the odds are not in their favor when they do.

On a call during the summer months when the Covid 19 lockdown put many first responders at great risk, Sgt. Colamarino was injured doing ordinance work that resulted in him falling through a porch that was in dangerously poor condition. The fall ended up severely hurting his back and knee in the process.

The National 9-99 Police and Sheriff Foundation was alerted to this situation and sprang into action after learning of the financial and physical difficulties incurred.

“This is the very reason the 9-99 Foundation was set up in the first place.”, Chairman Drew Howitt of the 9-99 Foundation points out. “We know benefits, while helpful, provided by cities and unions can help mitigate disaster, too often fall short of a Law Enforcement Officer’s basic family needs. LEO’s like Sgt. Colamarino deserve our help and the help of all who support the best and brightest where they live.”

Ofc Wentroble concurs. “Sgt. Colamarino is certainly worthy of any assistance being offered as his injury has taken his main source of income until he’s medically cleared to return to full time, active-duty status. I personally am grateful that the 999 Foundation is considering his application for assistance.”

The National 9-99 Police and Sheriff Foundation will certainly step up for Sgt Eric Colamarino. And we ask that during this holiday season, we remember our brothers and sisters in the big cities and small communities across this great nation that are struggling for any reason. We need them. Everyone does.

All who care to, may also give to Sgt Colamarino’s Crowdfund site. Thank you for giving what you can and please keep Eric and his loved ones in your prayers this Holiday season.