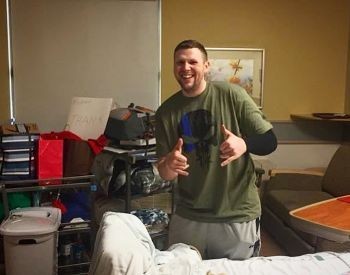 “My job is to protect lives,” said Officer Robert Jackson. “And if I have to risk mine to save somebody else, I’m going to do that.” This is the attitude of one of the officers we are able to support through the National 9-99 Police and Sheriff Foundation.

Officer Jackson from Kaysville, Utah responded to a call of a man who had doused himself in gasoline. He and three other officers arrived to find the man holding a lighter and attempted to de-escalate the situation. When that failed, Officer Jackson courageously attempted to take the lighter, jeopardizing his safety as the man managed to ignite it.

As a result, Officer Jackson received extensive burns on his legs and calves that require surgery and his left arm was burned from his wrist to his shoulder. He spent two weeks in the University Hospital burn unit. Recently married and with a baby on the way, these injuries pose a hardship on his family.

The National 9-99 Police and Sheriff Foundation has a scholarship fund for Emergency Relief situations like this, where we can provide immediate crisis support for officers and their families. The foundation contributed $1,000 to Officer Jackson and his family to show support and to help them get back on their feet.
Donation to Family of Gardena Fallen Officer
Thin Blue Line Ball Sponsorship
Board Member Application Scholarship Application