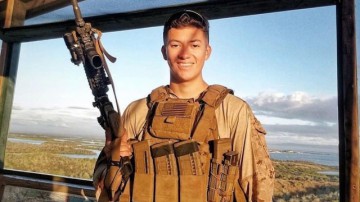 Last week we all watched in horror as the news from Afghanistan played out in front of us. Our horror turned to devastation as we learned of the thirteen American servicemen killed in the line of duty. One of which belonged to a local community that we partner with.

U.S. Marine Corps Corporal Hunter Lopez was one of the thirteen service members killed in last week’s despicable terrorist attack in Kabul. He was also a beloved member of the Riverside County Sheriff's Department family. Hunter chose to follow in his parents’ footsteps and joined the Riverside Sheriff’s Explorer Scout program from September 2014 - August 2017.

He then joined the United States Marine Corps and was assigned to the 2nd Battalion, 1st Marines. Hunter, who was just 22 years old, planned on becoming a Riverside County Sheriff’s Deputy once he returned from his current deployment. His life promised to be one of service, selflessness, courage, and sacrifice and his loss is acutely felt by many.

We grieve the death of a true hero who answered the call to serve, defend and protect our great nation. Like his parents who have so faithfully served the Riverside community, being a Marine to Hunter wasn’t a job - it was a calling.

As we mourn the loss of Hunter and his fellow Marines that were taken from us too soon, we ask that you join us in supporting Corporal Lopez’s family. 100% of your donation will go directly to the Lopez Family. Any small bit you can do will be a huge help to us as we do our best to help this family navigate a very difficult time. It is the least we can do.

Hunter, we thank you for your service and your sacrifice for our nation.